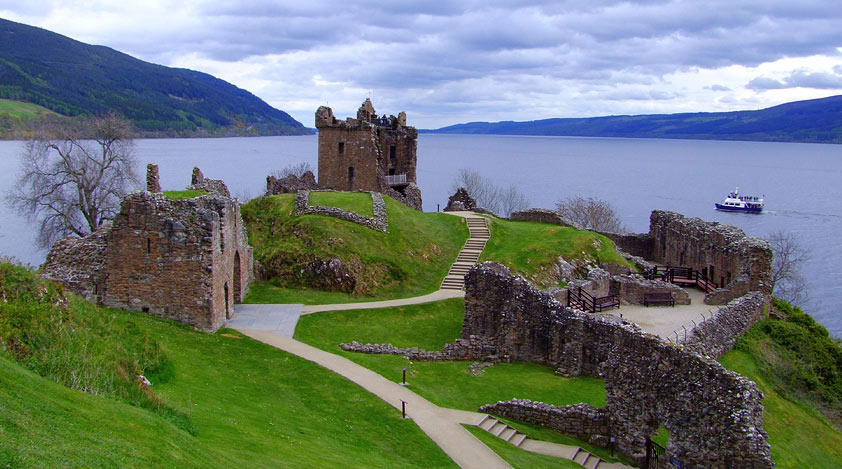 From big skies and vast lakes down to proud castles and forbidding ruins, Scotland retains its air of myth and legend despite the hustle and bustle of today’s society. The Caledonian Canal, the arrow-straight waterway that links the Scottish east coast at Inverness with the west coast at Fort William, is 60 miles of jaw-dropping landscapes, picturesque villages and commanding castles. It cuts through the spectacular Great Glen and it takes about three days to cruise from one end to another, but make it a week for a relaxed barge cruise where you get to immerse in the local culture, heritage and gastronomy.

Resist the lure of seductive Edinburgh for a while, journey into the wild Scottish heartland and you’ll realize that no photos or words can ever do justice to its natural, unpretentious beauty. Here are five of the most spectacular stops you will not want to miss in your itinerary.

You’ve probably heard of Cawdor Castle, thanks to Shakespeare’s Macbeth. Located 5 miles southwest of Nairn, Cawdor Castle used to be the seat of the Thane of Cawdor and was structured around a 15th century tower house that belonged to the Calder family. It then passed to the Campbells and has been the Campbell ancestral home since the 14th century. The carefully preserved castle offers visitors a glimpse of what life was like for the Scottish aristocracy in the 15th century. Inside, feast your eyes on beautiful furniture, elaborate tapestries and fine portraits. If you’re lucky, you might meet the Dowager Lady Cawdor who still lives in the castle but moves out during the summer months so visitors can be escorted through the furnished rooms. You might also want to take the chance to roam the castle’s magnificent gardens and tranquil forest. There are three perfectly-kept gardens in the vicinity but do take time to visit the Wild Garden which links with the Cawdor Burn behind the castle.

A bit of trivia: If you think the real Macbeth lived in Cawdor Castle, think again. Real-life Macbeth was an ancient Scottish king who died in 1057, about 300 years BEFORE construction of the castle started.

To fans of the Outlander series, Culloden Moor certainly needs no introduction. The atmospheric windswept moor might not look much but it will move you, once you dig through history and learn how the barren field became the setting of the famous 1746 Battle of Culloden, the final confrontation between the Jacobites and loyalist troops led by the Duke of Cumberland. Around 1,500 Jacobites breathed their last in Culloden Moor in the brief battle, making it one of the most harrowing events in British history. You’ll definitely notice the many grave markers in the ground, each one remembering a clan who fought and suffered heavy losses in the battle. For a deeper insight, drop by the visitor centre where numerous Jacobite artefacts are kept, including clothing, weapons and coins.

Monster or no monster, no barge cruise is ever complete without braving the legendary waters of Loch Ness. Propelled to fame by the 1934 “surgeon’s photograph” which shows the head and neck of the creature, this large and deep loch in the Scottish Highlands became the home of the Loch Ness Monster, or Nessie. The photo turned out to be a hoax, but the legend still lives and visitors can’t help but hope to somehow spot the fabled Nessie. Nessie (if it’s real) has not been sighted for decades of course, so what brings people to the lake? Loch Ness is the largest body of water in the Great Glen and it holds more fresh water than all the lakes in Wales and England combined. Just imagine the depth and sheer immensity of it when you’re cruising and the experience takes on a sublime effect. The ruins of Urquhart Castle and the surrounding hills also don’t hurt.

There’s absolutely no way you’ll cruise through Loch Ness and miss the romantic sight of Urquhart Castle that beckons even from afar. The castle is situated on a rocky promontory overlooking Loch Ness and it is more than just a hotspot for Nessie-spotting. Urquhart Castle, although now in ruins, was a mighty medieval stronghold that saw the invasions of King Edward I in the 13th century, the Scots’ struggle for independence in the 14th century and the MacDonald raids in the 15th and 16th centuries. It fell into ruin after the last soldiers who used the castle as garrison marched out of the castle and blew it up.

The majestic Eilean Donan Castle is no doubt one of Scotland’s most iconic and evocative castles. Originally erected to stand guard over the lands of Kintail, the 13th century castle sits on an offshore islet at the entrance to Loch Duich and is linked by a stone-arched bridge to the mainland. The mighty yet romantic castle, together with its elegant bridge, is the subject of millions of photographs worldwide. Because of its strategic location at the confluence of three great sea lochs, Eilean Donan Castle saw its own share of conflicts and got re-built four times throughout history. It even got destroyed in 1719 during the Jacobite uprising and stayed derelict for two centuries until Lieutenant Colonel John MacRae-Gilstrap purchased the entire island in 1911 and started to bring back its former glory. It re-opened in 1932 and is now the peaceful seat of Clan MacRae.

To get the most of a Caledonian Canal barge cruise, follow a 7-day itinerary from Muirtown to Banavie or vice versa. This route will not only take you to the five destinations listed above, but also to Glen Ord Distillery that lets visitors get up close and personal with Scotland’s best known export, whiskey. It was founded on the Black Isle in 1838 by the Mackenzies of Ord and today provides a fascinating learning experience for those interested in the ‘how’ of whisky production plus special tasting. A week-long barge cruise will also afford enough time for passengers to walk along the River Ness to the hamlet of Dochgarroch, or to explore Glencoe, renowned for its natural beauty and for being the scene of treachery between Campbell and MacDonald clans which resulted in the death of 38 members of Clan MacDonald. A carefully-planned cruise itinerary will also include a cable car ride to the summit of Aonach Mor mountain or a visit to the ruins of the Old Inverlochy Castle.