Along the banks of the Red River lies Hanoi, a city locked in time yet simultaneously leaping forward. Hanoi’s atmospheric Old Quarter, beautiful Hoan Kiem Lake and classic colonial architecture will leave you enchanted. There are excellent museums and art galleries to tour and when you get hungry, you’ll find the northern streetfood is both abundant and delicious. Pull up a chair at one of many charming cafes to watch life unfurl and gain a sense of the city’s timeless rhythm.

Not far from Hanoi waits the fairy tale landscape of Ninh Binh, where sheer limestone cliffs rear straight up from paddy fields, and rowboats will bring you on a mesmerising journey through river caves. No visit to the north is complete without a cruise on Halong Bay to soak in the sight of thousands of islets and the bay’s deep emerald green waters.

If you’re coming to Halong Bay, try to visit from April to June or September to November. You’ll have a better chance of enjoying sunny skies and pleasant temperatures. Other times of year, downpour or heavy mist is common, and  tropical storms can sometimes cause cruise cancellations. However, if you’re on the water during this time you can experience a more mystical side of Halong Bay, with its famous karsts shrouded in mist. Temperatures in January can be frigid, so be sure to bring warm layers.

The best time to visit Hanoi is usually from April to June or from September to December. From April the days are normally hot, occasionally above 30 degrees with clear skies. September to November sees cooler temperatures of around 25 degrees and sunny skies -- perfect for exploring the capital.

If you’re coming to Hanoi in June, expect soaring temperatures with humidity highs of 40 degrees, and the rainy season is full swing (June to August). December is cool, misty and atmospheric, however from late December until March temperatures are surprisingly cold with lows of 10 degrees. You’ll want to bundle up.

Vietnam’s Northern destinations such as Sapa have a much cooler climate than the rest of the country, particularly from late December until March. Sapa sees the occasional snowfall in January, so be prepared. Hotels in the area are equipped with heated blankets and local spas offer herbal baths for you to soak in and warm up. Sapa is near-perfect in late April, as flowers bloom and skies are clear. Early October is also lovely, as its impressive tiered rice paddies turn golden just before harvest.

March to May and September to November are the best times to visit Mai Châu. October is perhaps the most ideal month because harvest takes place and the rice takes on a glorious golden hue. 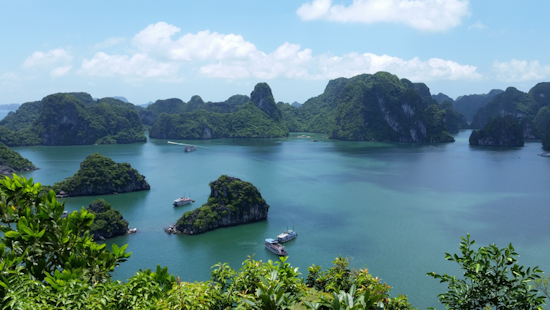 View package
View all
Home / Destinations / Vietnam /
Northern Vietnam
Entire Travel Group used to be known by the individual brands as shown below. The company has not changed, but we have amalgamated under one brand - Entire Travel Group.