Explore the different regions of Cambodia 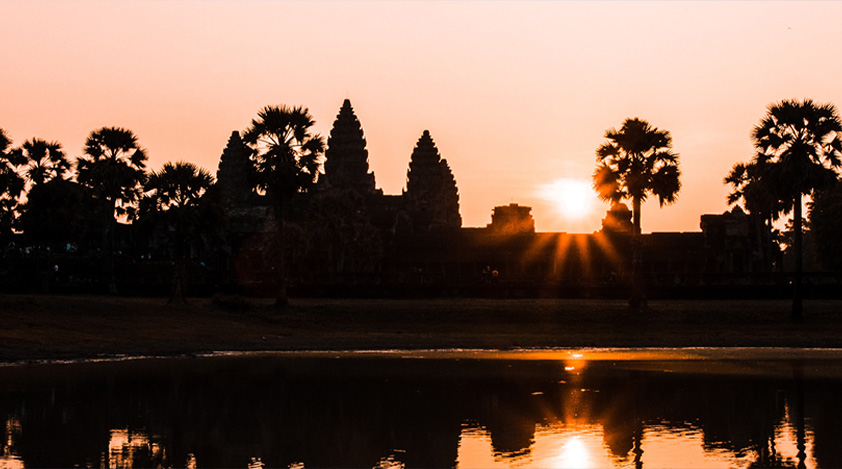 Siem Reap province is located in northwest Cambodia. It's the major tourist hub in Cambodia, as it is the closest city to the world famous temples of Angkor (the Angkor temple complex is north of the city).

The provincial capital is also called Siem Reap and is located in the South of the province on the shores of the Tonle Sap Lake, the greatest sweet water reserve in whole Southeast Asia. The name of the city literally means Siamese defeated, referring to the victory of the Khmer Empire over the army of the Thai kingdom in the 17th century.

Visitors come here to see the temples, of course, but there is plenty to do in and around the city when you're templed out. Siem Reap has reinvented itself as the epicentre of chic Cambodia, with everything from backpacker party pads to hip hotels, world-class wining and dining across a range of cuisines, sumptuous spas, great shopping, local tours to suit both foodies and adventurers, and a creative cultural scene that includes Cambodia's leading contemporary circus.

The average temperature is roughly 27°C and the minimum temperature is approximately 16°C. December and January are the coolest months, whereas the hottest is April.

Phnom Penh is the vibrant bustling capital of Cambodia. Situated at the confluence of three rivers, the mighty Mekong, the Bassac and the great Tonle Sap, what was once considered the 'Gem' of Indochina.

The capital city still maintains considerable charm with plenty to see. It exudes a sort of provincial charm and tranquillity with French colonial mansions and tree-lined boulevards amidst monumental Angkorian architecture. Phnom Penh is a veritable oasis compared to the modernity of other Asian capitals. A mixture of Asian exotica, the famous Cambodian hospitality awaits the visitors to the capital of the Kingdom of Cambodia.

Here in the capital, are many interesting touristy sites. Beside the Royal Palace, the Silver Pagoda, the National Museum, the Toul Sleng Genocide Museum, the Choeng Ek Killing Fields and Wat Phnom, there are several market places selling carvings, paintings, silk, silver, gems and even antiques. Indeed, an ideal destination for a leisurely day tour. The whole area including the outskirts of Phnom Penh is about 376 km squared.

The city temperatures range from 15 to 38°C and experiences tropical monsoons.

Monsoons blow from the Southwest inland, bringing moisture-laden winds from the Gulf of Thailand and Indian Ocean from May to October. The northeast monsoon ushers in the dry season, which lasts from November to March.

The city experiences the heaviest precipitation from September to October with the driest period occurring from January to February.