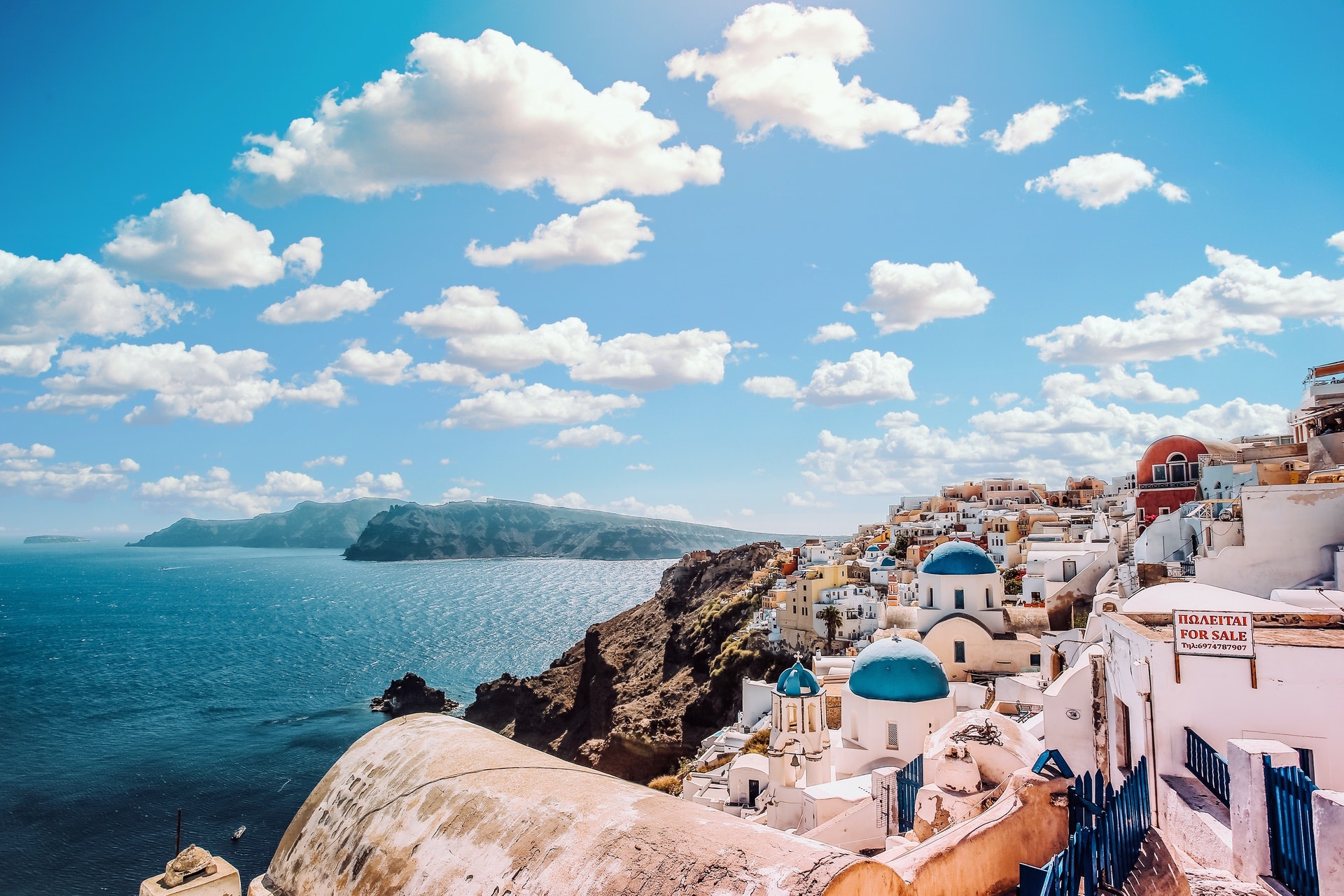 There are myriad things to do in Santorini, from unwinding in sun-soaked beaches and rugged cliffs to admiring quaint cobbled streets and white-washed buildings. Large volcanic eruptions have resulted in a distinct, rugged topography, softened by surrounding turquoise waters and the Mediterranean sun.

But beyond its natural beauty, the island has more to offer, such as its archaeological sites and other cultural attractions. No wonder this Greek paradise is one of the most popular tourist destinations worldwide.

To help you plan your holiday itinerary, we’ve listed the top tourist attractions in Santorini, Greece. 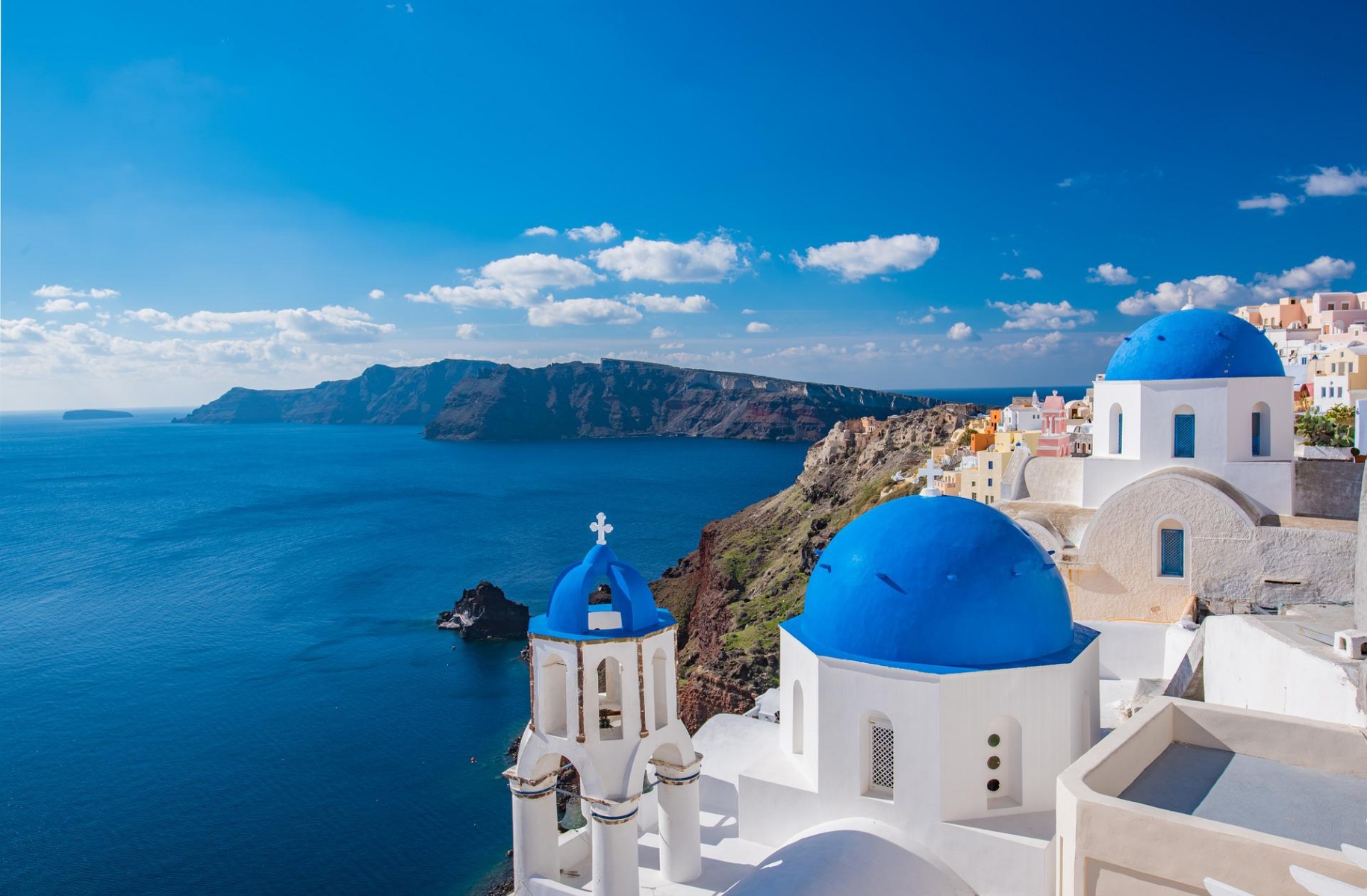 The Blessed Virgin Mary Catholic Church is one of the most snapshot-worthy spots in Fira. Its iconic blue dome is the capital’s most recognisable structure, making it a favourite backdrop for many wedding photos.

Visitors need to make their way through a small hill above the church to see its beautiful blue dome. You won’t get enough of the whitewashed cubist homes, tranquil seas and blue skies. Get the best atmosphere when you go there after sunrise or at dusk.

Ammoudi Bay is considered to be the most romantic spot on the island of Santorini, with its sparkling turquoise waters and quaint Greek tavernas. Travellers must descend around 200 steps from the town of Oia before reaching this picture-perfect setting.

You can try cliff diving for an adrenaline-thumping adventure or charter a sailboat to tour the island’s rocky fringes and soak up the Mediterranean sun. The bay is also an excellent place for seafood lovers as there are fresh fish sold by the locals and restaurants perched on the edge of hills. Have delicious meals in any of the fish taverns in the area while enjoying a magnificent view of the Caldera and Aegean Sea. 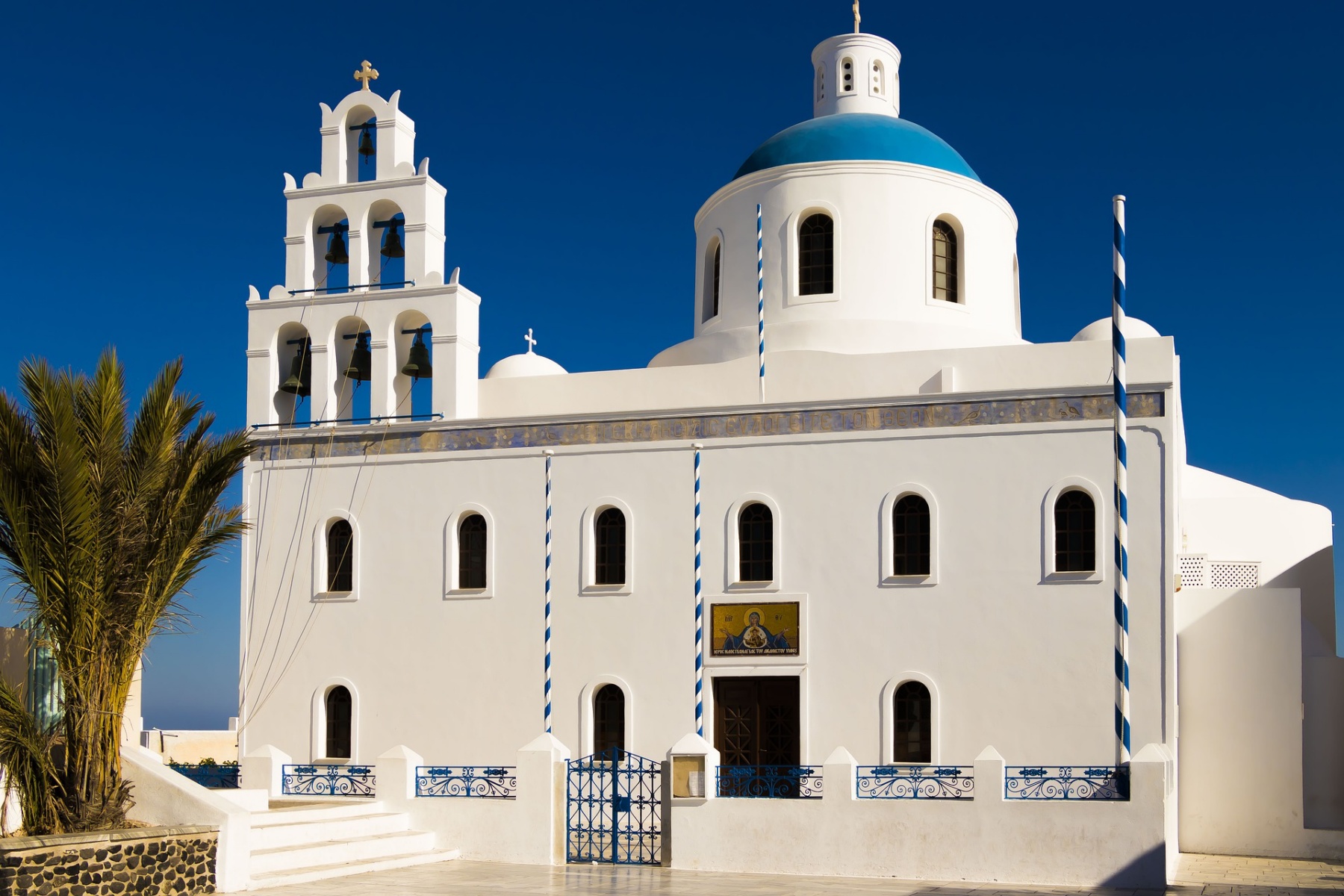 This place of worship is dedicated to the Akathist Hymn of the Most Holy Theotokos. Constructed initially inside the walls of Oia, the Panagia Platsani Church was moved to its current location, the village centre. It was also rebuilt on higher and more stable ground after an earthquake in 1956. The building has a white-washed facade, arched windows and a blue dome similar to the Virgin Mary Catholic Church.

Another popular attraction in Santorini, Greece, is the Akrotiri Archaeological Site. The ruined city of Akrotiri gives travellers a different perspective of Greek settlement. It is nicknamed “Santorini’s Pompeii” as it experienced the same fate as it was also buried by an ancient volcanic eruption. Travellers can explore the site by walking on the once-thriving town’s remains. You can see how Akrotiri once thrived with what’s left of its multi-level buildings, drainage systems and pottery, which are evidence of its once flourishing economy and culture. 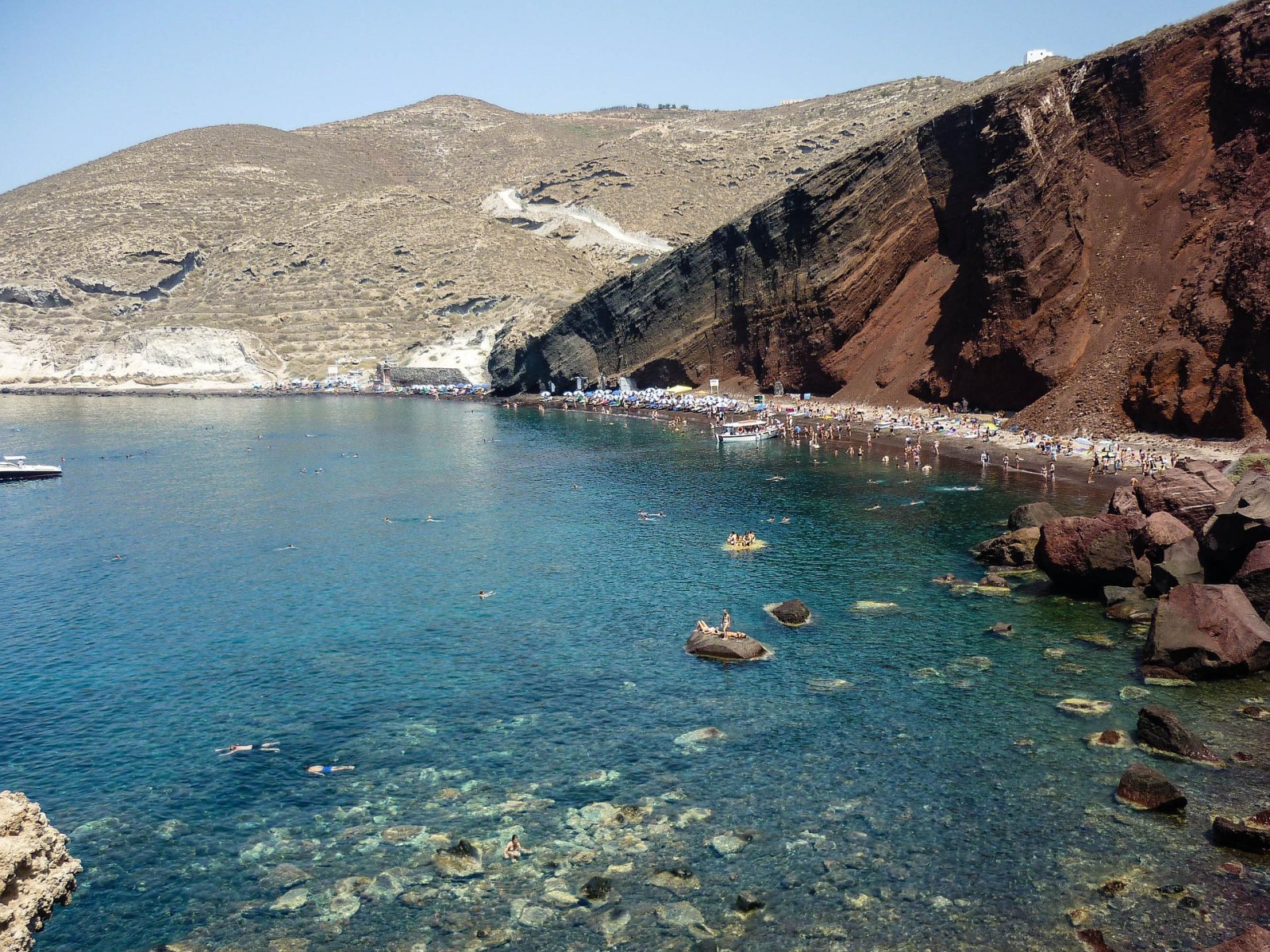 Another one of Santorini’s geological wonders is the Red Beach. The beach is easily accessible from the town of Akrotiri, either by taking the bus, driving down a rocky path, or riding a boat from nearby ports. It got its distinct red colour from the pulverised rocks from a nearby caldera.

Ancient Thira is a must-see destination for Santorini travellers. Located on the island’s southeast coast and high above a clifftop, this archaeological site is a wonder to behold. The city was ravaged by an earthquake, with its ruins being some of the oldest in Greece. While very little of it remains today, you can still see buildings that once stood there, such as ancient temples, theatres and other structures. The remains of Thira still show the rich and unique history of the country. 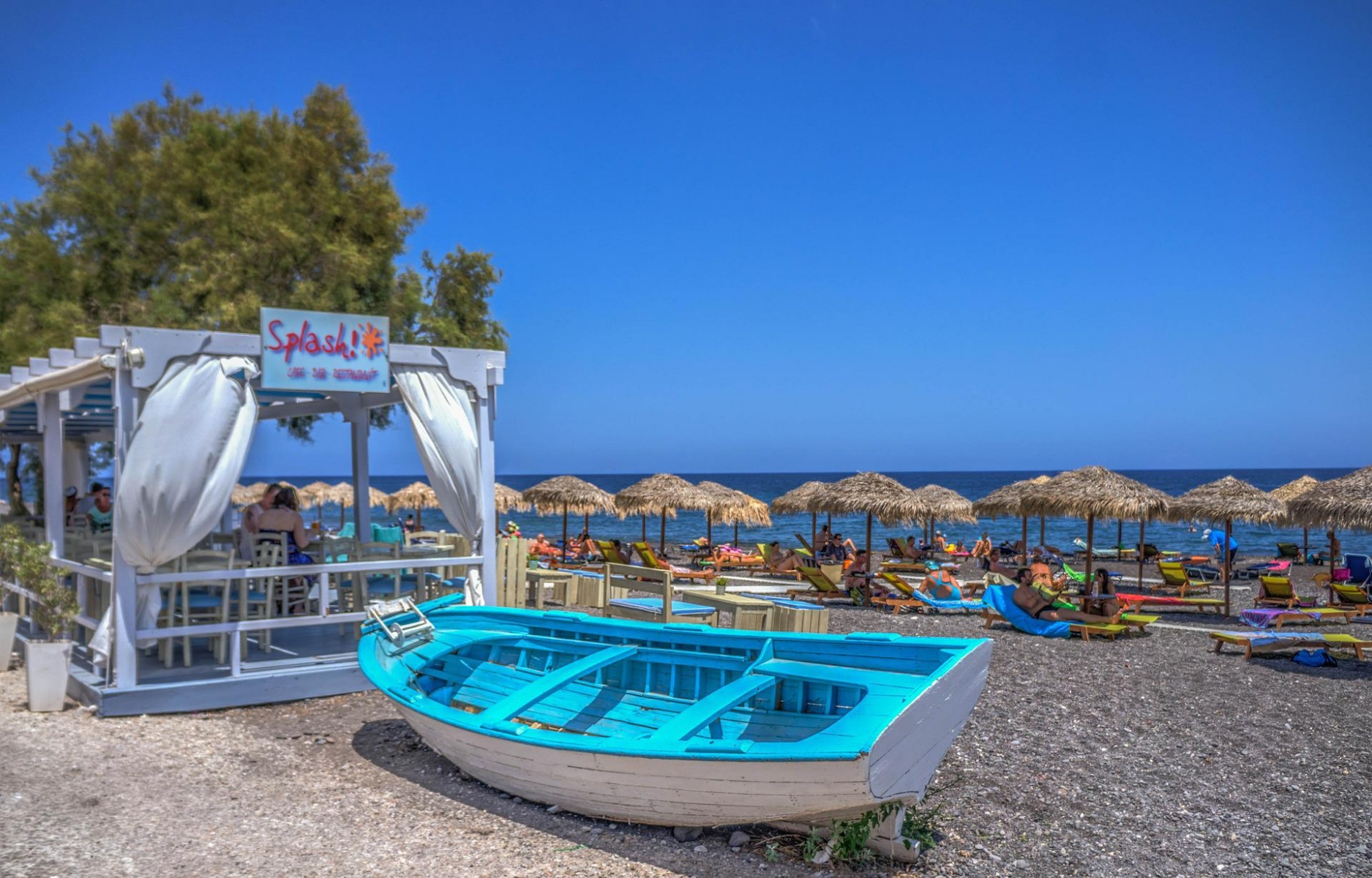 Santorini doesn’t fall short of exciting beaches to visit. Adding to the list is Kamari Beach, a popular destination known for its black sand and contrasting deep blue waters. It’s readily accessible since it’s near Fira. However, this also means that it can be one of the busiest beaches on the island during peak season.

Kamari Beach is a top tourist attraction in Santorini, Greece, with its many exciting activities, such as swimming, sunbathing and snorkelling. There are also many restaurants, shops and cafes lining its beachfront for your convenience.

Therasia is the ideal destination to enjoy the sunny climate of Santorini without the crowds. Located just opposite Oia, this crocodile-shaped island is quieter and more peaceful than the bustling main island. Make sure to drop by the Manolas village and its taverns during your visit. 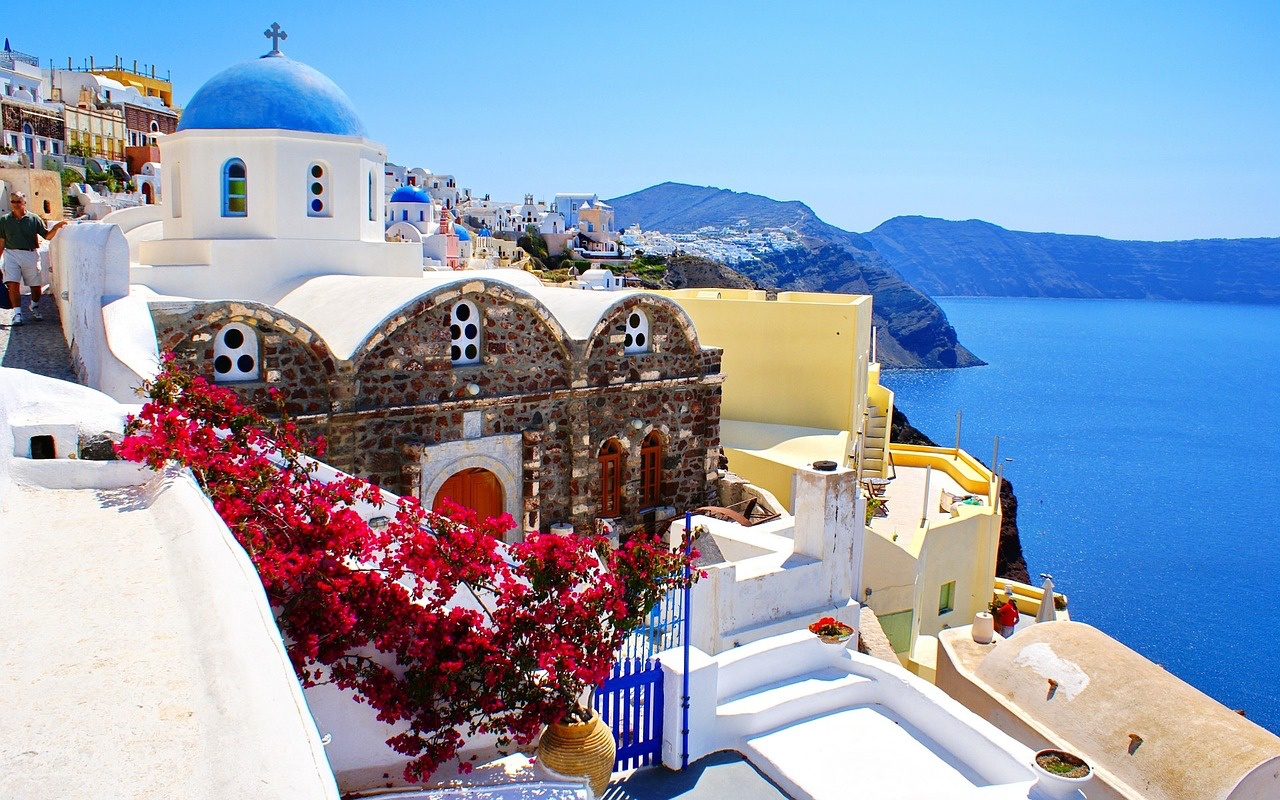 Formed by a devastating volcanic eruption, this cauldron-shaped depression forms the outer half moon-shaped bay where much of Santorini’s towns are perched on. The caldera was formed by a massive volcanic eruption that caused the collapse of the Minoan civilization. The eruption gave birth to Thira, the island’s capital, while succeeding eruptions formed the smaller, nearby islands.

The best way to witness the expanse of this landform is by taking a boat trip or hiking around its perimeter. 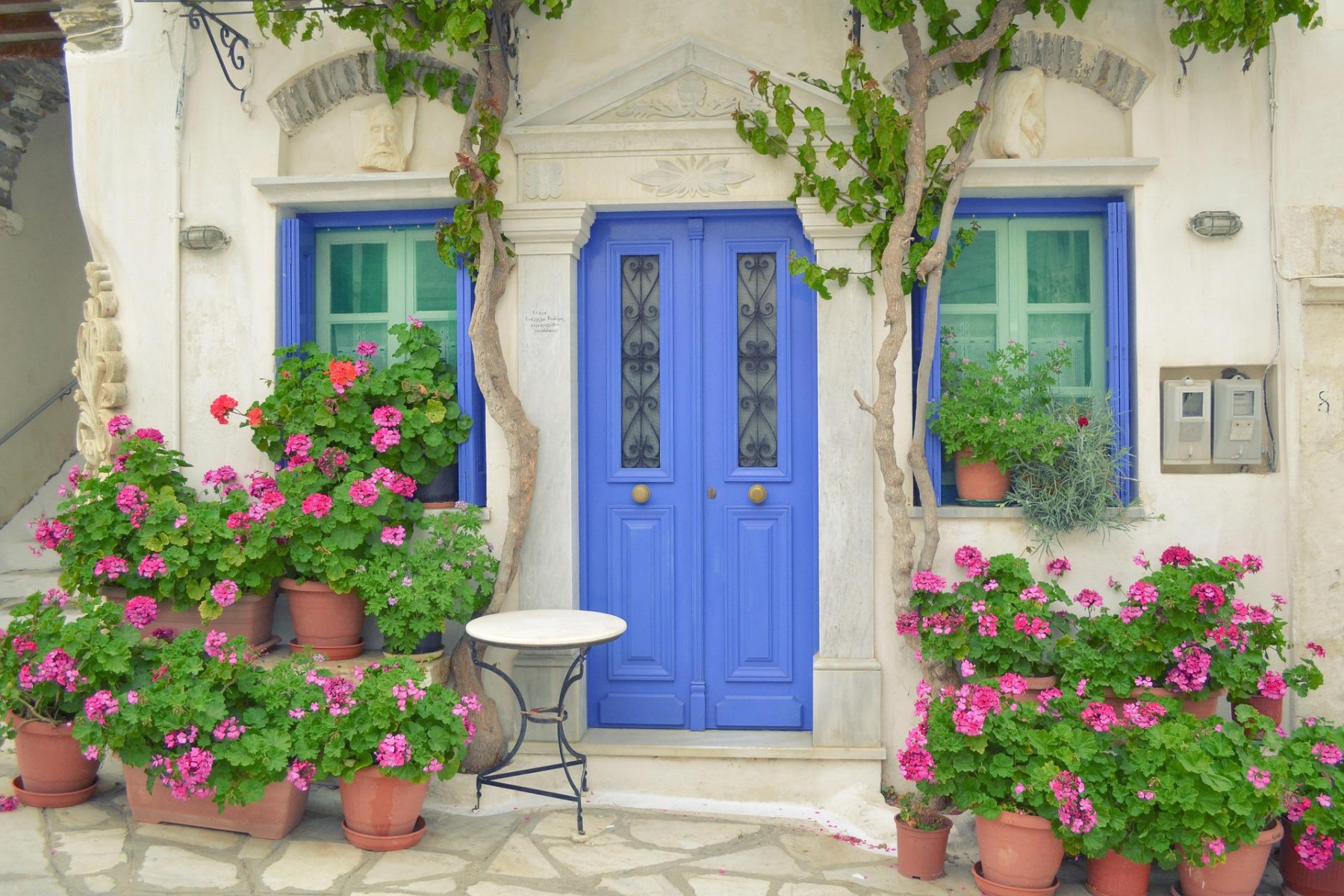 The small inland city of Pyrgos was once the capital of Santorini before it became Fira in 1800. It has a Venetian castle perched on the summit of a hill, along with many other white-washed Cycladic cottages surrounding it.

Since 2004, Pyrgos has opened itself to upmarket tourism by opening various establishments for travellers, such as restaurants and boutique hotels. Its unspoilt beauty features fine examples of Mediaeval architecture.

This 18th-century sanctuary gets its namesake from the mountain on which it was erected. Mt. Profitis has an elevation of 584 metres above sea level, making it the highest point in Santorini. The hike to the white-clad Byzantine-style monastery takes about an hour. But every step is worth it since you get to see the spectacular panoramic views of the island from the top.

Travellers can wander its peaceful grounds and admire the frescoes and icons scattered in its vicinity. There are the monastic archives, a library and a small on-site museum where you can find artefacts from the history of the abbey. 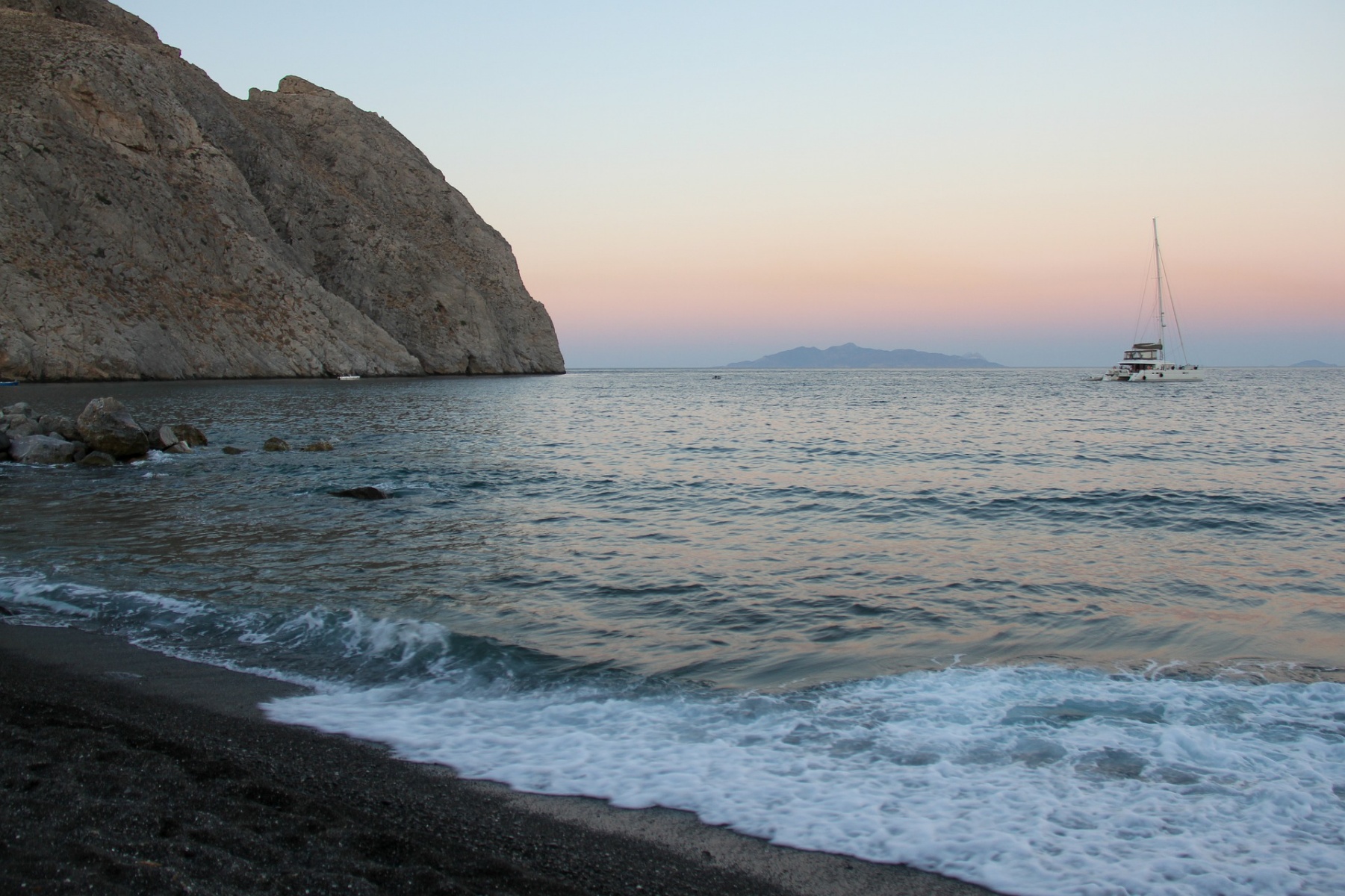 Between the villages of Perivolos and Perissa and at the base of Mesa Vuono Mountain is the six-kilometre-long Perissa Beach. Tourists can enjoy an impressive sight of fine, black sand, lush tamarisk trees and dark blue waters. It is worth noting that the beach has received the Blue Flag award for its impeccable cleanliness.

While Perissa Beach is slightly less developed than Kamari Beach, it provides travellers an equally enjoyable time with restaurants, diving locations and water sports such as parasailing and jet skiing.

Include this Santorini, Greece tourist attraction to your itinerary to get an authentic al fresco movie screening experience. The Greek outdoor theatre tradition has continued to live on since its construction in 1887. You can grab a snack and watch a film under a blanket of stars. Apart from movie screenings, Cinekamari also hosts exhibitions, theatre performances and concerts. 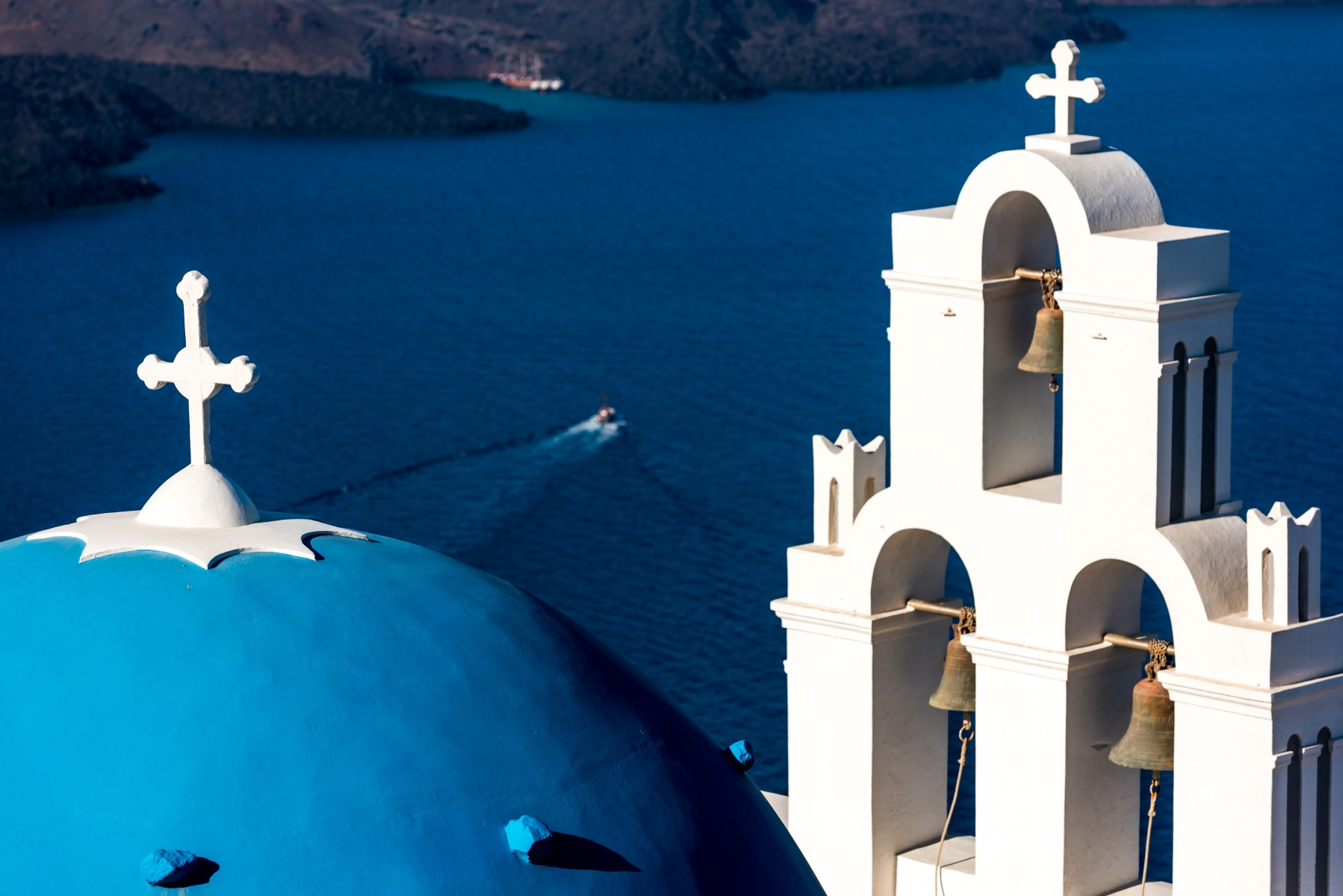 This Greek Catholic church is famous for its three distinct bells, iconic blue dome and Cycladic architecture. It’s also officially known as The Catholic Church of the Dormition and is located above the cliffs overlooking western Santorini, making it one of the best vantage points on the island. It was initially constructed in the 18th century and has undergone several renovations over the years. It also received a major restoration following an earthquake in 1956.

There are so many things to do in Santorini that will make you want to return for more. Its volcanic origins add to the magic of Santorini. It resulted in unique land formations that you won’t see anywhere else. Explore the many wonders of Santorini when you go to any of these attractions and experience its many beauties.

Choose from our Greece holiday packages to explore this proud island. 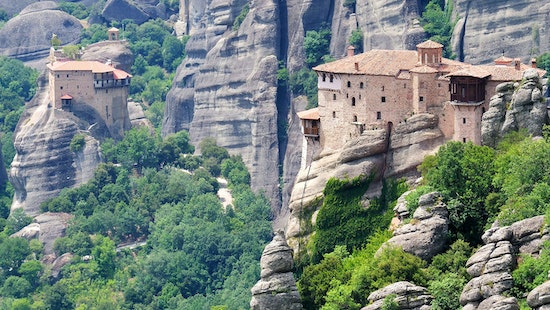 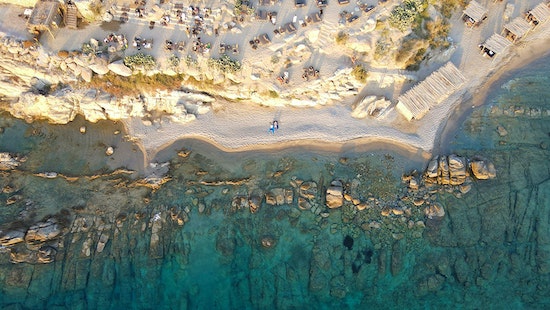 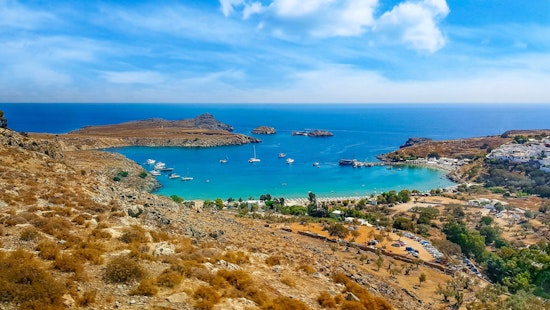 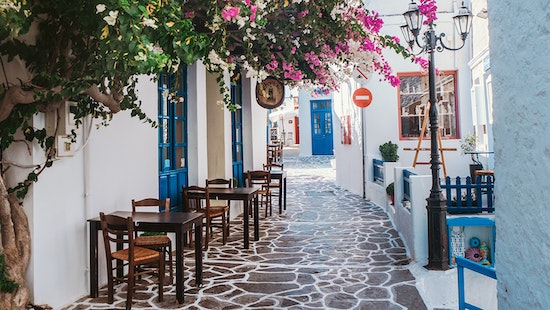 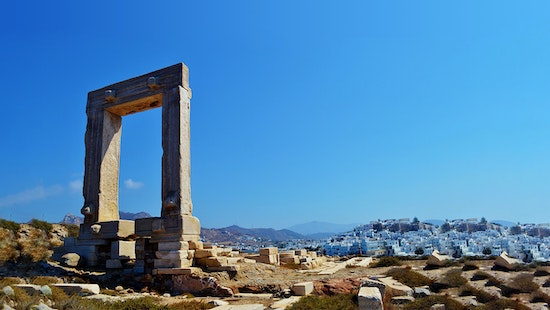 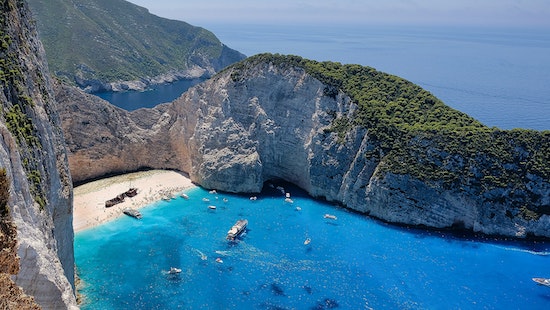 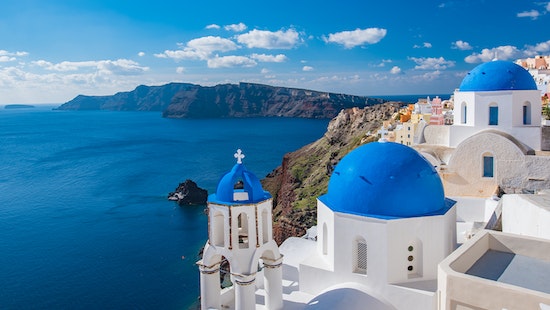 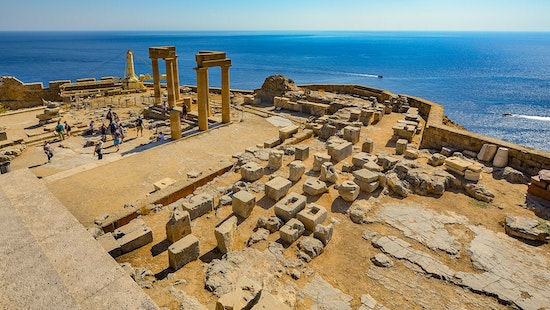