Malta is staunchly Roman Catholic but is also home to a beguiling mix of cultures that has stewed together over generations. Cuisine here is a taste of the Island's multicultural heritage. Local restaurants offer a creative selection of tempting fare. After dinner, night clubs, wine bars and casinos beckon with their own brand of excitement.

Malta is an attractive year-round destination and  recommended times to visit will vary on interests, budget, and weather preferences. Generally, the best time to visit is  during  the spring (April to June). It’s mostly sunny, temperatures rise and May is usually the month where swimmers start heading to the beaches.  Spring is the time of year when some of the best annual events are organised:  Medieval Mdina (reenactments in one of the top tourist attractions), the international fireworks festival in Valletta, Festa Frawli (fresh strawberries everywhere), Isle of MTV, Earth Garden, and more!

If the summer heat is something you long for and actually want for your holiday,  July, August or September are the best months.  There’s a good chance you won’t see a  cloud in the sky during your  stay and you’re guaranteed to get a tan even if you stay in the shade. Yes, it will be busy on the beaches, but not to the extent that it’s likely to be an annoyance to you.

If your main focus is exploring the Maltese islands, your best bet is basically any month apart from July or August. December, January and February are usually the coldest and wettest months of the year.

Expand Collapse  all
Can you wear shorts in Malta?

Ladies'    bikini tops and very short shorts are not suitable in towns especially in Valletta.  For sunbathing,  don't go topless at the beach. When visiting a church, you should wear tops with short sleeves (not tank tops) and long shorts or better still long trousers.

Flights and getting to Malta

Malta International Airport  (Valletta)
Six express (X) services and other buses run from the airport to all of Malta's main towns from around 5am to midnight. Transfer  services to major hotels take  15 to 25 minutes.

Alternatively, you can consider ferries and buses.  Valletta Ferry Services operates regular ferries between Valletta's Marsamxett Harbour and Sliema,  as well as from near Valletta Waterfront to the Three Cities.

To get from Valletta to the Three Cities, another option is on a traditional wooden   dghajsa .

Many bus routes on Malta originate from the Valletta Bus Station and radiate to all parts of the island, but there are also many routes that bypass the capital; bus timings range from every 10 minutes to hourly for less-visited places. Punctuality is a challenge, however, and many buses run considerably late, especially in the afternoon and evening. Patience is a traveller's friend. On Gozo, the bus system is much more efficient than previously, though some places are only served by an hourly bus.  You can buy single tickets as you board the bus or from ticket machines, which are found near numerous bus stops.

There are no train services in Malta. 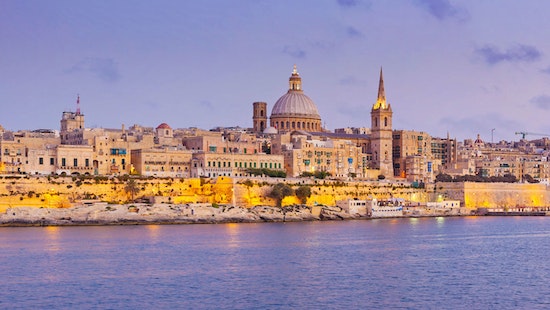