Home / Inspirations /
Canal du Midi: A Voyage Back in Time

Canal du Midi: A Voyage Back in Time 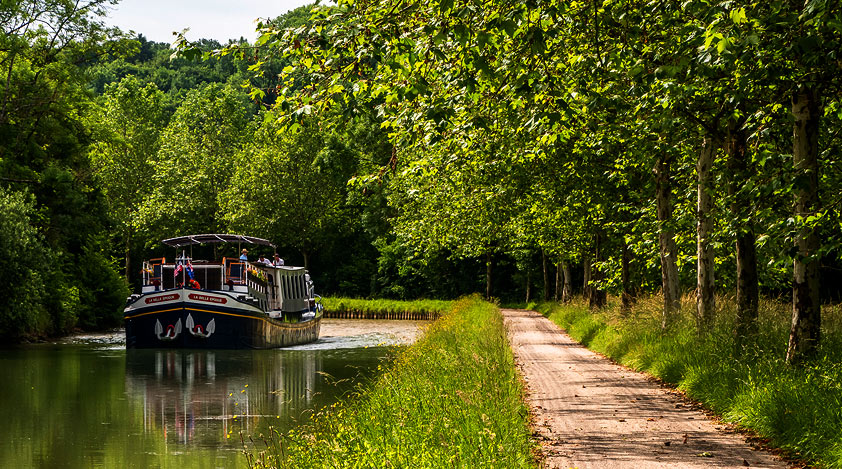 Running from the blushing rose city of Toulouse all the way down to the Mediterranean coastal town of Sète, the 240-kilometre Canal du Midi is one of the most extraordinary feats of civil engineering in modern times and remains the key inland waterway in Southern France today. It’s funny to think that when the idea of “a canal which could be built in this province of Languedoc to connect the Atlantic Ocean and the Mediterranean sea” was proposed in 1662 by a man called Pierre-Paul Riquet, almost everyone thought that the mad plan would fail just like all the other plans before it, except it didn’t. Nineteen years later in 1681, the waterway was first used and just like what usually happens when a mad plan succeeds, it was considered a genius so much so that the Marquis of Vauban lamented, “J’aurait donné ma vie pour avoir construit cette oeuvre” (I would have given my life for having built this work).

This amazing green serpent of France snakes through 328 locks, bridges, aqueducts, tunnels and other structures, and flows through Haute Garonne, Aude and Hérault. Canal du Midi links numerous canals and rivers that shaped France’s history and trade, making a barge cruise through its length seem like a journey back in time. Canal du Midi is also one of Europe’s most scenic waterways and a UNESCO World Heritage Site. Hop on a Canal du Midi barge, navigate the canal’s timeless waters and you’ll find yourself face to face with ancient fortresses, hilltop villages, walled cities and medieval towns nestled in the most spectacular of landscapes.

If you are considering a cruise on Canal du Midi, here are six incredible places you won’t want to miss:

The fortified city of Carcassonne is the largest walled medieval city in Europe.

Perched on a hill overlooking the Aude River and back-dropped by the serrated Pyrenees, the medieval fortified city of Carcasonne dominates the luscious valley and creates a visually striking scene. A double 3-kilometre long wall, the longest city wall in Europe, encircles the city and 52 massive towers dating back to the 13th century pierce the horizon, with slate roofs glinting in the sun. With the impressive walls, towers, turrets, ramparts and barbicans, not the to mention the ancient houses and structures inside the city itself, it is quite easy to imagine life in the olden days with armoured knights marching around, archers standing vigil on the ramparts and shopkeepers peddling their simple wares. In fact, this perfectly restored citadel is another UNESCO World Heritage Site and pulls in plenty of visitors each year that it rivals Mont St. Michel for the title of the most visited monument in France.

A barge cruise on Canal du Midi will bring you to the foot of Carcassonne and the view you’ll get to see from the barge is one for the books. Take time to explore the hilltop castles and the lovely square in the centre where you can find many exquisite restaurants and cafes.

Known as the first town out of Italy to be colonized by the Romans, Narbonne used to be the second largest town in Gaul whose prosperity is attributed to its bustling port. Sometime during the Middle Ages, the sea receded and the once coastal city of Narbonne now sits eight miles inland. Thanks to this colourful history, Narbonne is such a spectacular must-see destination today often included in Canal du Midi cruise itineraries. Don’t miss its well-restored medieval quarter with the Cathedral St-Just, the tallest cathedral in southern France, a magnificent Gothic structure and well-known for its beautiful tapestries and stained glass.

When barge cruising, keep an eye out for Pont des Marchands, an inhabited bridge constructed in the Roman Period and which now traverses the Canal de la Robine. Pont des Marchands is also a UNESCO World Heritage Site and there are only two other such bridges in the whole of France today.

Béziers was the home of Pierre-Paul Riquet, the man created the Canal du Midi.

Wine lovers, hear hear! Luxury hotel barges cruising the scenic Canal du Midi provide regional wine specialties on board as part of the experience, but nothing compares to the enjoying a glass in the city where it is produced. The hilltop town of Béziers is the heart of the Languedoc wine region and you can expect to find the famous wine anywhere you go in the city. Go on a wine appreciation cruise and chances are Beziers will be looking back at you if you check the itinerary.

Aside from its vino, Béziers is a spectacular sight to behold, with the grandiose 13th-century Cathédrale St-Nazaire dominating the scene. Head to Le Pont Vieux, a stone bridge spanning the Orb, or to Le Cimetière Vieux, an 18th century open-air museum that houses several tombs and artworks by local sculptors including Injalbert and Lean Magrou.

Here’s a quick trivia. Béziers was the home of Pierre-Paul Riquet, the man whose vision led to the construction of the Canal du Midi.

Dubbed the “quintessential medieval village”, picturesque Minerve perches on a naturally defended rocky peninsula where the Cesse and Briant Rivers meet and is quite a must-visit place for while on a cruising holiday. The high location allows access to sweeping views of the surrounding countryside, making the visit to the village all the more worthwhile.

Minerve is the ancient capital of Minervois and you’ll find countless ancient structures and remarkable fortifications in the city. Amble through its historic streets to the remains of the 13th century Candela (castle) or to 11th century Roman style Church of Saint Etienne that is the highlight of the village and whose altar is believed to date back to year 456. Porta Bassa, one of the two main original gateways to Minerve, can also be seen.

Like most historic towns and villages in France, Minerve wasn’t always tranquil and is actually the site of one of the most brutal sieges in history. Surrounded by deep limestone gorges that made the village inaccessible and easily defended, it took six weeks of siege and the destruction of its only well before this Minerve fell to the cruel Simon de Montfort in 1210 who was chasing the cathars taking refuge in the heavily fortified village. History notes that 140 Cathars were burned at the stake.

Capestang’s iconic bridge, said to be one of the lowest bridges on the Canal du Midi.

Situated on the perimeter of the old Étang de Montady or the “pond of Montady” which is now a drained lagoon, the charming village of Capestang boasts the 12th century collegial church of St-Étienne, whose massive towers puncture the horizon, and the summer residence of the Archbishops of Narbonne. And remember to watch out for Capestang’s iconic bridge, said to be one of the lowest bridges on the Canal du Midi.

Winding its way from the Aude into the Herault, Canal du Midi passes just to the north of the town and is a great spot for biking. There are at least 20 cycling routes in and around Capestang. Biking is one way to truly soak in the beauty of the city and enjoy the verdant French landscape, and luxury hotel barges on a Canal du Midi cruise often include bicycles for guests.

Charming Le Somail is one of the many villages designed by Pierre-Paul Riquet.

The pretty little village of Le Somail is one of the many villages designed and built by Pierre-Paul Riquet to facilitate the lifestyle and commerce surrounding Canal du Midi. Strike a pose as your Canal du Midi barge nears Le Pont de St-Marcel, a 17th century stone-arched bridge straddling the canal, and make sure to check out Le Somail’s 18th century chapel which used to be a granary, and the old ice-house directly opposite it.

If you’re a booklover, here’s a treat for you. Le Somail is home to a fabulous secondhand book shop which was transferred from Paris brick by brick and houses the most extensive collections of first-edition books!

Need help planning your Canal du Midi cruise holiday? Give our team of barge travel specialists a call at 1300 380 992 or send an enquiry for expert advice and information on luxury barges, barging packages and special offers. 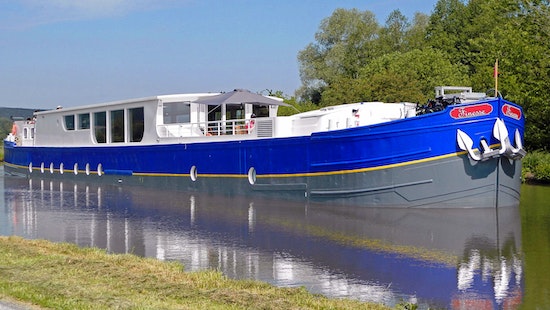